Sanguine AC Monza currently third in Serie B. They are the club in Italy with most second tier seasons (39) without ever having played in Serie A. Only promoted back to Serie B last season, they are just a point off second place. Venezia (Venice) FC currently second, having been readmitted to Serie D after bankruptcy only four seasons ago.

Silvio Berlusconi owns them, Adriano Galliani is CEO and they have Mario Balotelli & Kevin Prince-Boateng playing for them

Just saw Joaquin is still going, and playing every week, on the wing, aged 39.

Copa Del Rey semi 2nd leg tonight with Sevilla already 2-0 up on Barca from the first leg. If Sevilla get through then they will be into their 11th cup final since 2006. They had only been in 4 cup finals in their entire history before 2006

Winston Biscuit Copa Del Rey semi 2nd leg tonight with Sevilla already 2-0 up on Barca from the first leg. If Sevilla get through then they will be into their 11th cup final since 2006. They had only been in 4 cup finals in their entire history before 2006

They are 8-2 in those ten finals to date too. They've won all six of their Europa League finals.

...might be a McDodderick here but I recall a FoCcers foreign holiday on one o' they Balearics/Canaries in a self-catering thingy with an unexpected bonus of a TV: much to the better half's distaste -
Probably a May/June hol as we often went early (or v late) to avoid others kids - so shortly before or just after our own started arriving late 90s.....

...anywheres : managed to sit down to watch what appeared to be a season-ender between Sevilla and Betis. Never witnessed such a low key big-Derby - found out later, they'd BOTH already suffered relegation in the preceding week.
Might need to look that one up in case it's my dodgy ageing memory playing tricks.

Genclerbirligi suffer a bad defeat at Gazientep ; Basaksahir scrape a point at home to Konyaspor and creep out of the bottom four .... and then this PM huuuuge shock as bottom club Ankaragücü, manage to upset league leaders Galatasaray 2-1

and climb above their Ankara neighbours.

Barca through to the final

Copa Del Rey 19/20 hasn't happened yet. That is due to take place next month with the Copa Del Rey 20/21 final happening 2 weeks later

Bilbao could in both depending on tonight's result

Sounds like the amounts they pay will be capped and wont end up being endless millions. Weird goings on though.

...Bobby L gets one back - Sane looking pretty decent too - Dortmund need to grab some of the chances they are getting on the break, if they are getting anything out of this - can't see their back line keeping out Bayern.

... The gruelling midweek game v Monchengladbach might come back and haunt them late on - Bayern had a week off and have a few decent options off the bench - Dortmund limited by injuries - no Sancho for example.

...as the summariser mentioned in the round-up : 'merciless' ...

Goretzke's measured volley was different class and then Rob Lew. goes and bangs it into the same place a minute later - the King outdoing the Crown Prince on this occasion.

Felt for 'Super' Dortmund as they did get close to earning something .... but much as I foretold -probably ran out of puff and had nowt off the bench today, though did give Bellingham a go.

I'd chuckle rather sensibly if Koeman delivered La Liga title to the Nou Camp. Barca have won 13 and drawn 3 of their last 16, whilst Atletico have stuttered, winning just 2 of their last 6.

In 80 games since he left Molde (including 7 for Norway), Haaland now has 80 goals and 19 assists.

When down a bit of a rabbit run when reading about Schalke and how their awful season compares to Bundesliga's worst. Pretty much every 'worst' record for the league is held by the Tasmania Berlin side of 1965-66. Fewest wins (2), most defeats (28), fewest goals scored (15), most goals conceded (108), biggest home defeat (0-9) and most consecutive games without a win (31) - and others.

Thing is, they were never supposed to be there - the club had finished third in the Regionalliga Berlin (in the 60s everything below Bundesliga was regionalised). Hertha Berlin had been relegated and cold-war politics determined that a club from Berlin had to be found a place in the Bundesliga. The winners of their regional league, Tennis Borussia Berlin, had lost to Bayern Munich (promoted that year) in the play-offs. Second-placed Spandauer FC refused promotion on the grounds of unpreparedness, but Tasmania took a gamble - and went on to set a plethora of terrible records.

Sanguine I'd chuckle rather sensibly if Koeman delivered La Liga title to the Nou Camp. Barca have won 13 and drawn 3 of their last 16, whilst Atletico have stuttered, winning just 2 of their last 6.

Not just the league, the double is very much there to be won still!

The Guardian has had a deep-dive into clean sheets, based on the hypothesis that some clean sheets are better than others, or moreover that some keepers have to work harder to achieve them. The article highlights (for example) that of Mendy's 13 clean sheets for Chelsea this season, he hasn't had to make a save in 5 of them. That's not to denigrate Mendy, but illustrates how good the defence in front of him has been.

The analysis boils down to this chart, which perhaps unsurprisingly has Emi Martinez has one of the most effective keepers in the Europe.

Martínez has made 50 saves for his 14 clean sheets, compared to Mendy’s total of 16 saves for 13 clean sheets, which should really bring into focus the purpose of this analysis. 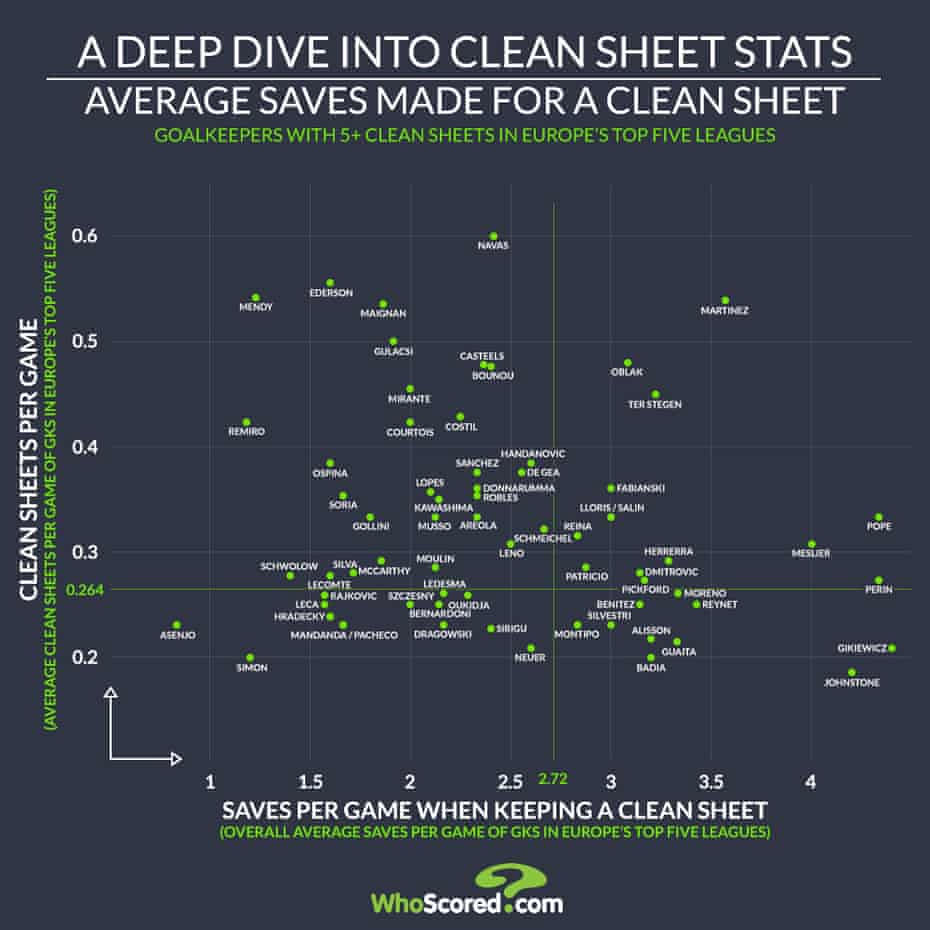 Interesting too to see Pickford the right side of both average lines, given the perception that he often lets in goals that he shouldn't.
Nick Pope about the hardest working keeper in Europe.
Post Reply
3260 posts

Users browsing this forum: No registered users and 9 guests