What a great away performance. Carroll was instrumental in the equaliser, and a fantastic touch for his goal.

Southwood had a great game. Yiadom should've cleared their first goal, but other than that the defence did great.

Lovely to see Halilovic back and his back-heel nutmeg was gorgeous.

Swift, Drinkwater and Laurent all had good games.

And well done Paunovic for the changes. As much as he was to blame for the Sheff Utd defeat, he equally needs credit for today.

Totally different performance to Tuesday. Still defending wide open far too much, but today we ran at Swansea and played with a high pace and tempo when going forward.

Few people getting a bit over excited, I doubt Carroll is going to score many goals from a ball over the top to breakaway. Swansea played a very high line, which we are not going to come across often and we took advantage well.

It was an excellent performance going forward, and Southwood had an excellent game, saving our blushes a few times.

Work to be done still, and need to carry it forward into games where we won't be as able to break on the opposition as easily.

Form is improving. Halilovic is so key.

Great game and a great win!! Moore and Ejaria haven't played well this season and both weren't missed at all. TDB played great on the left and showed what we've been missing, pace!! and despite the early error in defense they largely played well.

Carroll played well and gave us a target, and took his goal well and for me Southwood was immense.

Today proved we could easily lose Ejaria, Moore and Rafael and raise some cash and get a big slice off our wage bill. 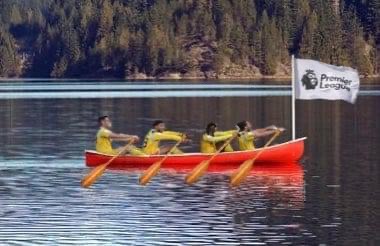 Good performance, good support from us, it was really cold. Should be super happy but just got in to see the news and am now deflated af.

Not sure about that, I would say that the changes were forced on him, if Moore and Ejaria had been fit it’s probable they would have both played.

Not sure about that, I would say that the changes were forced on him, if Moore and Ejaria had been fit it’s probable they would have both played.
Assumed it was a tactical decision, didn't know they were injured.

I hate the Liberty Stadium and the journey. It’s not egregiously bad but the only good thing about it is the chippy over the road, which is better than anything I can find in London.

Love our spirit to twice score after conceding. Carroll looks a lot like the Wayne Bridge/Anton Ferdinand types who drop to this level in their early 30s after spending their careers near the top, just has a touch of class about him that would be easy to overlook given his reputation as a bruiser.

Remember when Akpan first joined us and he looked like he had reasonable technique, good mobility, and a tendency to make progressive passes even if he was no Danny Guthrie? Then we tried to play him as a defensive midfielder and he was awful? Well, TDB is the player we thought Akpan was going to be, just has this great knack for making things happen, he’s audacious but not in a showy way, very direct, chalk and cheese with Ejaria.

Holmes is in much better form than Moore and must continue to start at least until McIntyre is available, or until his own form drops. Don’t think he looks as good as Moore at his best, not getting carried away, but we need to select on current form rather than reputation.

Found out this week that Halilovic was once heralded as the Croatian Messi. Obviously there’s a huge talent gap, Halilovic isn’t even half as good at this level as Messi is at the highest level, but stylistically there’s an uncanny similarity, the way they run, their height, that scooped pass to the far post Halilovic plays.

Agree about Ejaria and Moore, they just seem to think they are far toooooo good to be struggling in the EFL. Time to cash in.

Just the shit-the-bed, knee-jerk, reactionary bull crap about the new covid variant and restrictions. Won’t go into it on here, I guess that’s for AE, but it took a huge shit on what was otherwise a really good day!

It was overall a much improved performance than we’ve seen recently, for a team where we are, how we’ve been playing, the results and performances we’ve had… I think that’s about the best we can hope for at the moment. Was it an amazing performance? No. Were there lots of things we could improve? Absolutely. On another day could the result have been different? Definitely.

Swansea we’re always going to have more of the ball so I think our game plan was definitely the right one, at times I thought we were wasteful in getting it forward, but it obviously worked as we got in on several occasions (difficult to see from in the ground but I’m not convinced as many were offside as they were flagged for).

TDB looked as good as he has done in that advanced role (on the left this time), literally polar opposite to Ejaria, Carroll brings that quality that we’ve lacked and I thought Rahman had his best game for us. I was anxious about him constantly playing his man onside but he was obviously weary about his pace and by and large dealt with him all afternoon.

I’d love to see some replays of those goal mouth scrambles, how much Southwood got to them - but regardless made some really smart saves, and was brave. Some people think some players are scapegoats, and others get away with certain things - Southwood being one of the latter. If I was to highlight something I don’t think he’s strong at is one on ones. When Moore sold him short at Birmingham, my first thought was Southwood’s made it easier for their lad. We got lucky against Forest and the same again today. His positioning and timing one on ones is not great, he needs to fully commit, or stay on his line for longer - at this level I would say the latter is probably better. No where near as clinical. In the end he ends up being in no mans land and it’s really easy to just knock it past him and have an open goal to aim at. I’m not saying this is a massive issue, on balance I still think he’s quality and much more trustworthy than Raphael, but it is something I’ve noticed. Not a oxf*rd clue what Yiadom was doing for the goal. I know he was off balance but I just feel he should be doing better.

Their second goal had a massive bit of luck about it. Yes we could have done better with the clearance, but come on. He’s hardly a goal scoring machine and week foot first time volley? You can’t legislate for that. That being said, on the balance of play no less than they deserve. Thought overall defences were naff on the whole - represented by the scoreline and an entertaining game. I felt last 20 minutes it died a bit but picked up just before the end.

Overall good day and a really rare win against Swansea, first away league win there for 20 years or something?

Oh and we’ve got a Big oxf*rd Geordie.

View Championship league table as it stood on 27 November 2021